In midsummer heat some 60 delegates attended a week-end conference in Tamworth to discuss the career, context and significance of Æthelflæd, lady of the Mercians. She died in Tamworth in June 918 and has recently been granted a new statue in the town. It is hard not to see her image as a powerful woman, now written into history, as one which resonates with contemporary tastes and ambitions. Delegates from across the world, from the USA, Canada, Spain, Japan, New Zealand, Wales, and Scotland, as well as Mercia, Wessex

and Northumbria, heard seventeen terrific papers on themes as diverse as female power and authority,  the politics of early tenth-century Britain, Wales and Ireland as well as the landscape and architecture of Tamworth and its region.  Brothers, Carl and Ben Phelpstead curated a small photographic exhibition, and Carl gave a paper on the literary landscape of Mercia in nineteenth and twentieth century Britain. Their twitter site https://twitter.com/VisionsofMercia gives further information. Historian and novelist, Victoria Thompson Whitworth, who has used Æthelflæd as a character in her novels gave a spirited presentation on the use of her character in modern literature, bewailing the pornification of the middle ages. David Roffe bravely tried to reconstruct the entry for Tamworth in Domesday Book; none appears in the record. But, the phrase which stood out was that the year ‘918 was a year of infinite possibilities’. We know what did happen afterwards, but Æthelflæd’s death in Tamworth in 918 was the window top an unrealised world.

Throughout the conference we were the guests of Tamworth Borough Council and papers were delivered in the witan chamber, much to everyone’s amusement, whilst we had dinner at the Globe Inn and in the Great Hall of Tamworth castle.  It is hoped that a book containing the papers will appear in due course.

If people are attending the Æthelflæd conference in Tamworth 13-15 July 2018 they might like to add a public lecture to their programme? Historian and broadcaster Michael Wood will be reprising some of his recent thoughts on Æthelflæd in St Editha’s church in Tamworth on Thursday 12 July 2018 at 7.30.  Full details and how to book are given here BOOKING FORM Michael Wood 12 July 2018 MD

Today witnessed a ‘national service of commemoration’ to mark the 1100th anniversary of the death of Æthelflæd in Tamworth. It is often difficult to upstage a bishop in full costume, much less an archbishop and six bishops in one place, but the presence of Prince Edward, the current earl of Wessex, the Danish ambassador, many mayors and enough uniforms to muster a respectable fyrd came close. And, that’s before we start counting Tamworth’s own Æthelflæd, in costume, and a household of  Saxon warriors also in costume. Four cast members from BBC’s Last Kingdom, including Millie Brady, who played Æthelflæd were also in attendance, alongside the region’s great, good and the modern version of the medieval clerical proletariat, a respectable choir of academic historians. Michael Wood and Simon Keynes had bit parts.

So, what were the highlights? Kim Sadler, the singer, gave a terrific version of the rarely-heard nineteenth-century song, Tamworth, heart of Mercia’s kingdom, but the most significant moments were when four eminent female professors, Judith Jesch, Jane Roberts, Barbara Yorke and Dame Jinty Nelson, read from early-English sources to illuminate Æthelflæd‘s life. Jinty Nelson gave a a short but weighty appreciation of her role in peacemaking between Mercians and Danes, as well as her more well-known martial achievements.

A new window was also unveiled in the church to match the new statue recently erected in the town. You can watch a short video taken by the Tamworth Civic Society here:

According to the famous Glenn Miller song I’ve got a gal in Kalamazoo Tex met his girl at the campus dance. But, Kalamazoo is indeed the home to a famous campus, Western Michigan University which has for decades been the host to North America’s biggest conference of medieval scholars.

At this year’s conference which has just finished Æthelflæd was ‘the toast of the town’. There were special screenings of Michael Wood’s documentary film on the lady of the Mercians, and two sessions were devoted to her history and later reputation.

Michael Wood took part  in one of the sessions. Does his shocked expression suggest that he has just been invited to ‘do the Æthel’? His paper reflected on the status of Mercian women and their higher status than in Wessex, her role as a military leader and patron of saints’ lives, especially of St Margaret of Antioch. In the same session Stacy Klein of Rutgers University in New Jersey picked up some of themes in her book on Ruling Women. There was a general   absence of definitions of queenship, and rather the emphasis on kingly qualities in the behaviour of a king’s closest friends, advisers and family. Chastity was crucial and this may explain some of the stories about Æthelflæd. But, her Mercian identity was also emphasised in the re-u

se of her charter to Much Wenlock Priory. 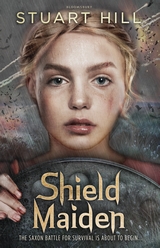 Popular themes in each derived from Wainwright’s traditional definition of her as a ‘women wronged by silence.’  Her military engagement, a ‘woman’s shape containing a man’s character, and her role as a mother and foster mother, especially of her daughter Aelfwyn, being popular themes. Stuart Hill’s novel is written as her own narrative from the age of eight onwards.

Æthelflæd made other fleeting appearences in other sessions at the conference, interest in her history notable on two continents.

Æthelflæd is what academic historians call her, but for almost the whole population of Tamworth she is and remains Ethelfleda. The name and reputation of this Mercian ruler  from the tenth century in the town is a surprising example of a community zealously guarding its own history.

But, if you want to know what academics have said about her then here is a summary bibliography. A list of suggested web sites, growing daily, will appear in a later blog.

Reprinted with thanks from The Conversation 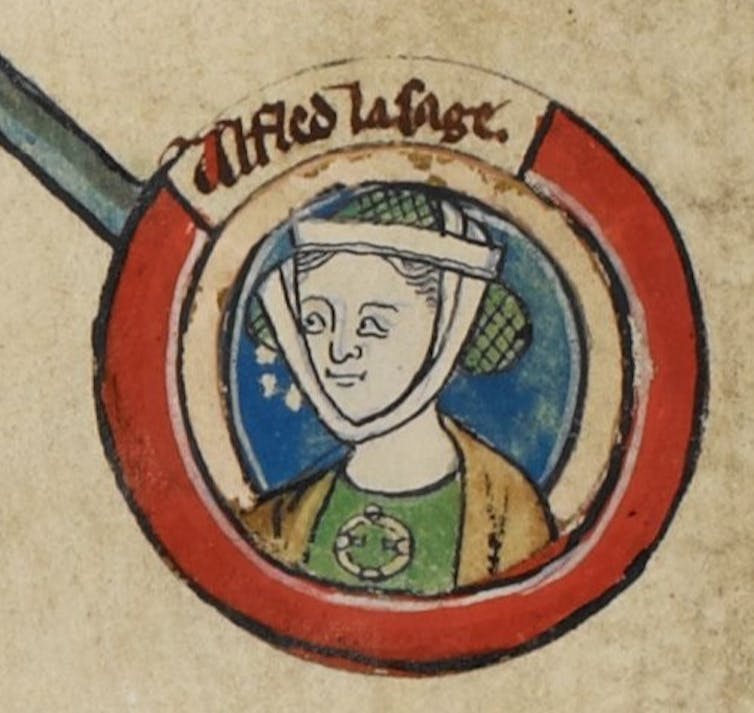 The UK now has a female prime minister and Elizabeth II has been queen for more than six decades, but few would associate Anglo-Saxon England with powerful women. Nearly 1,100 years ago, however, Æthelflæd, “Lady of the Mercians”, died in Tamworth – as one of the most powerful political figures in tenth-century Britain.

Although she has faded from English history, and is often seen as a bit-part player in the story of the making of England, Æthelflæd was in fact a hugely important figure before her death in 918, aged around 50. Indeed, the uncontested succession of her daughter, Ælfwynn, as Mercia’s leader was a move of successful female powerplay not matched until the coronation of Elizabeth I after the death of her half-sister Mary in 1558. So, while Bernard Cornwell’s novels and the BBC series The Last Kingdom are cavalier with the historical facts, perhaps they are right to give Æthelflæd a major role.

Æthelflæd was born in the early 870s. Her father, Alfred “the Great” had become King of the West Saxons in 871, while her mother, Eahlswith, may have been from Mercian royal kindred. At the time, Anglo-Saxon “England” was made up of a series of smaller kingdoms, including Wessex in the south, Mercia in the Midlands and Northumbria in the far north. All faced encroachment by Viking forces that were growing in strength and ambition, as outlined in Charles Insley’s article The Strange End of the Mercian Kingdom and Mercia and the Making of England by Ian Walker.

Æthelflæd spent most of her life in the Kingdom of Mercia married to its de facto ruler, Æthelred. Mercia had seen some dark days by the time of her marriage. In the eighth and early ninth centuries, the Mercian kings had had good cause to consider themselves the most powerful rulers in southern Britain. But by the 870s, the kingdom had suffered dramatically from the Viking assaults which had swept across England.

One king, Burgred, had fled to Rome, and his successor, Ceolwulf II, was seen as a mere puppet by the West-Saxon compiler of the Anglo-Saxon Chronicle and disappeared between 878 and 883. Soon, the East Midlands were ruled by Scandinavians – what became known as the “Danelaw” – and so the kingdom ruled by Æthelflæd and Æthelred was by then just the western rump of the old Mercia.

Nevertheless, Æthelflæd and Æthelred together engaged in massive rebuilding projects at Gloucester, Worcester, Stafford and Chester, overseeing the refounding of churches, new relic collections and saints’ cults. Famously, in 909, the relics of the seventh-century saint, Oswald were moved from Bardney, deep in Scandinavian-controlled Lincolnshire, to a new church at Gloucester. Perhaps appropriately, for a couple facing the Vikings, Æthelflæd and her husband had a great attachment to the saint, a warrior king and Christian martyr. Æthelred was buried alongside Oswald in 911, and Æthelflæd joined him seven years later.

At the time, Athelred and Æthelflæd did not call themselves king or queen, nor do the official documents or coins refer to them as such. Instead, they used the title “Lord/Lady of the Mercians”, because Alfred had extended his authority over Mercia and styled himself “King of the Anglo-Saxons”.

But they acted like rulers. Æthelflæd, with her husband and her brother Edward the Elder, King of the Anglo-Saxons, launched a series of military campaigns in the early tenth century. These brought all of England south of the Humber and Mersey river under Anglo-Saxon control and rolled up the Scandinavian lordships which had been established in the East Midlands and East Anglia.

These advances were backed up by an energetic programme of fortification, with burhs (fortified towns) built in places such as Bridgnorth, Runcorn, Chester and Manchester.

But while she called herself a “lady”, outsiders, especially the Welsh and Irish, saw Æthelflæd as a “queen” and she surely wasn’t just her husband’s subservient wife. As Alfred the Great’s daughter, the role Mercia and the Mercians would play in the kingdom of the Anglo-Saxons was at stake.

But Æthelflæd really came into her own following her husband’s death in 911, although it seems that he had been in poor health for the best part of the previous decade. The Mercian Register in the Anglo-Saxon Chronicle, certainly celebrates her deeds from 910 onwards.

In 915, she successfully campaigned against the Welsh and the major Welsh kings, and in England she began further to expand her kingdom. In 917-8, her army took control of Viking-occupied Derby and Leicester, and just before her death, the “people of York” – that is, the Scandinavian lords of southern Northumbria – also agreed to submit to her.

For a brief moment, she had authority not just over her own territory in Mercia, but over the Welsh, the Scandinavian East Midlands and possibly part of Northumbria, making her perhaps one of the three most important rulers in mainland Britain – the others being her brother Edward king of the Anglo-Saxons and Constantin II macAeda, King of the Scots.

This made her a major political actor in her own right, but also a respected and feared figure. Even more remarkably, she passed her authority on to her daughter, Ælfwynn, who was around 30 when her mother died. The rule of Ælfwynn in Mercia, which attracts virtually no comment at all from historians, lasted about six months before her uncle Edward launched a coup d’état, deprived her of all authority and took her into Wessex.

This is a  blog designed to complement the conference to celebrate the 1100th anniversary of the death of Æthelflæd, lady of the Mercians, at Tamworth in June 918. The conference site is http://www.aethelflaed.org. It is available to all so if you would like to add something use the contact button above.